Yesterday I did the ancestor birthday of Abigail Nicholson, who married Nathaniel Albertson. I noted that her father Samuel Nicholson did not name her in his will. But he did name her as his daughter when he deeded property to her a few years after she was married. This is that deed.

Due to the handwriting it appears to be a copy made by the county from earlier records. This was available on FamilySearch.org from Perquimans County North Carolina records, deed book A, no. 285. 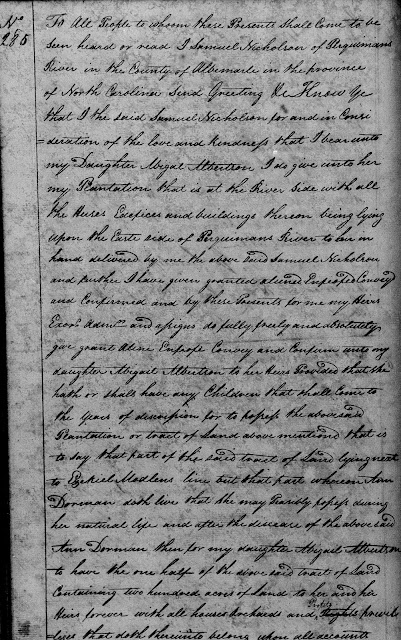 No. 285. To All People to whom these Presents shall come to be
seen heard or read I Samuel Nicholson of Perquimans
River in the County of Albemarle in the province
of North Carolina Send Greeting __ Know ye
that I the said Samuel Nicholson for and in Consi
=deration of the love and kindness that I bear unto
my Daughter Abigal Albertson I do give unto her
my Plantation that is at the River side with all
the Huses [sic] Edefices and buildings thereon being lying
upon the Easte side of Perquimans River to her in
hand delivered by me the said Samuel Nicholson
and further I have given granted aliened ____ conveyed
and confirmed and by these presents for me my heirs
Exec_ admi_ and assigns do fully freely and absolutely
give grant aline[sic] ______convey and confirm unto my
daughter Abigail Albertson to her heirs provided that she
hath or shall have any Children that shall come to
the years of discression for to possess the above said
Plantation or tract of Land above mentiond that is
to say that part of the said tract of Land lying next
to Ezekiel Modlens line but that part whereon Ann
Dorman doth live that she may Peasibly possess during
her natural life and after the discease of the above said
Ann Dorman then for my daughter Abigail Albertson
to have the one half of the above said tract of Land
containing two hundred acres of Land to her and her
heirs forever with all houses, orchards and _____ previl
=leges that doth thereunto belong whose all accounts